WEATHER ALERT Library Open for Extended Hours from 10am-5pm on Saturday as a Warming Location for Residents Read On...

A chapter 40B comprehensive permit application was filed with the ZBA. The ZBA voted to approve the application for Comprehensive Permit with conditions on June 18, 2009. TCB was awarded $1,150,000 in federal tax credits and $1,550,555 in other soft subsidies on 2/16/11. Construction began in the spring of 2011 and completed in the summer of 2012. 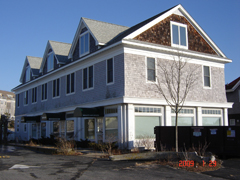 The April 2009 Annual Town Meeting authorized $150,000 in Community Preservation Act Funds for the renovation and conversion of an existing building from 10 SRO units and one 4-bedroom apartment to 13 independent efficiencies and 2 one-bedroom apartments increasing affordable units from 5 to 15 affordable units. A Ch. 40B comprehensive permit application was filed with the ZBA. On June 18, 2009 the ZBA voted unanimously to approve with conditions the Application for Comprehensive Permit. On 2/16/11, DHCD awarded $737,828 in state subsidies to the project. Construction was completed in early summer 2012. Contact Community Housing Resource at 508-487-2426 x 3 for an application or check Community Housing Resource's website for additional information. Applications for the initial rental round closed on March 19, 2012. Future applications will go onto the wait list.

On October 9, 2007, the Provincetown Community Housing Council voted to approve the issuance of 3 Community Housing Permits following extensive review of the Zoning Board application submitted by WK Red Clay, LLC as well as several meetings with the principals, for the development of "Herring Cove Village," a project located at 21 Bradford Street Extension to consist of 17 dwelling units and 26 bedrooms. Originally purchased as Bissell's Tennis Club, the property had 8 pre-existing dwelling units. Red Clay received approval to build an additional 9 units for a total of 17 units with the provision that 3 of the 9 [33%] be affordable. These permits provide an incentive to developers to include a mix of affordable housing units into a development by gaining access to an additional pool of growth management gallons. A Regulatory Agreement was executed on 11/29/07 and recorded to restrict the affordable units in perpetuity.

The owners divided the construction into 2 phases, recently completed, Phase I includes 11 units (8 market and 3 Affordable). Phase II replaces the tennis club house and builds the additional 6 units (6 market). Note that the original agreement had 2 affordable units in Phase I and 1 in Phase 2, this was amended on 10/27/08 to construct all 3 affordable in Phase I. Phase II will begin at a date to be determined. Photos and information are also available at their Herring Cove Village

The lottery for three one-bedroom home ownership units was conducted on Wednesday, June 17, 2009 at the Grace Gouveia building. All three affordable unnits have been sold and are occupied!

Construction is 100% complete. All 23 units received certificates of occupancy as of 7/18/16. Marketing & outreach started 11/5/15. All 23 of the Stable Path rental units, including the 5 median income units, have been added to the SHI bringing our certified number to 9.75%. CHR received 104 applications in response to 212 requests for applications postmarked by the deadline of 1/5/16. Of those 104, 68 qualified under local preference. 58 applications [56%] were from single-person households. The Housing Specialist participated in the lottery conducted on 1/15/16 which determined the review order of those applications; full review includes interviews, references checks, and home visits & continues until full occupancy. Ribbon cutting was held on 9/23/16!