The Provincetown Police Department has 9 police officers cross-trained and certified in police bicycle operations. While mostly a seasonal position, the bicycle patrol supplements the traditional patrol force and has become a useful and beneficial addition to the Department.

The bicycle team was started in 1992 as another component of the department's proactive approach to law enforcement and service to the community. The Bike Patrol is viewed as both an aid to furthering positive community relations and as a sensible approach to patrolling the unique challenges of our downtown area. The deployment of the police bike patrols offer the Provincetown Police Officer another way to quickly and efficiently patrol the inner sections of the congested and largely pedestrian area of downtown, and in the process increases the visibility and approachability of the officers to the community they serve.

Bicycle patrols offer easy access in crowded areas and have become a barrier-breaking tool in community policing. Our bike patrols are utilized during all parades, celebratory events, fireworks, and have even been used in undercover narcotics investigations.

Each Bike Officer is trained and tested before being assigned to patrol. All officers of the team must attend and successfully complete a Mountain Bike Patrol School certified by the Massachusetts Police Training Committee (MPTC) known as COBWEB (Cops On Bikes With Education for Bicyclists).

COBWEB is the original Massachusetts Police Mountain Bike Patrol Course designed to train the officer for his/her duties while on a Bike Patrol assignment. The COBWEB course is a 24 hour three day program with both classroom and field instruction. Upon completion of the course, the officer will have developed a heightened awareness of the importance of fitness, nutrition, injury prevention and physical well-being. The officer will have a comprehensive understanding of standard operating procedures, crime prevention techniques, tactical maneuvers and communication.

Both the officers and the community have seen the reward of having this resource within the Provincetown Police Department. 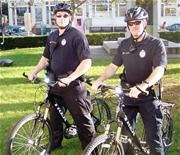